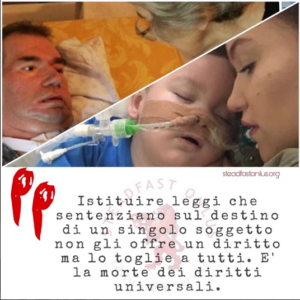 Those who follow and support us, know the story of little Alfie Evans, who we will remember tomorrow the second anniversary of the premature death caused by the detachment of the life support that allowed him to breathe.

An attempt was made to do anything possible to stop a law that believed his best interest was to die because he was incurably ill, therefore unworthy of living.

After long negotiations and endless legal attempts, the only possible step was made: the recognition of the Italian citizenship.

Unfortunately, Alfie did not manage to get to Italy but his tenacity and the strength with which he fought his battle for life have been an example. For this reason, we found it necessary to request to name a street in Rome to honour him: one of our fellow citizens who wanted to live so much to move entire nations, institutions and the Church in order to have the freedom to do so.

Though, there are those who make proposals going exactly in the opposite direction: on 28 April 2020 it will be discussed, in the Roman local government, the proposal of the Democratic Party and the Five Stars Movement to name the gardens of San Giovanni Bosco Square, by placing a plaque, that states “Giardino Piergiorgio Welby – writer and activist for civil liberties (1945- 2006) “.

Piergiorgio Welby, suffering from muscular dystrophy, died in December 2006 due to the detachment of the life support performed by the doctor Mario Riccio, after sedation of the patient.

There was a legal case, which managed to answer some questions, leaving others unsolved: was it legitimate to detach the artificial support? Who was responsible for the detachment? Was the treatment to be considered therapeutic obstinacy?

The judges rightly established that the use of the artificial respirator did not represent therapeutic obstinacy, therefore it was to be considered vital. This is demonstrated by the fact that Welby died as a result of the detachment of the support and needed sedation to relieve the pain that this procedure causes.

Under Article 32 of the Italian Constitution, which gives the patient the possibility of refusing / renouncing medical treatment, the doctor who “pulled the plug” was not sentenced but was considered the necessary tool for the patient no longer in the condition to be able to do it by himself, to exercise this right. With this ruling, the Court opens a big question on the issue related to the role of the doctor who, by his nature and according to the ethical and deontological code he is required to respect, is aimed at saving lives.

Many doubts still remain unsolved, as those concerning also the ethical and moral aspects of this story, which for us at Steadfast Onlus are of essential importance. The human rights are such because they protect and guarantee the person in his entirety, starting from the right to life, without which all other rights do not exist.

We therefore believe it is a dangerous proposal, which exposes those who read the plaque to the risk of believing that, since it was posted by the institutions, this type of practice is good and charitable, therefore right.

Even more dangerous is the proposal that local schools are present at the future inauguration. This means that kids will learn that whatever you want, it is a right to have it.

It does not matter if, doing so, the inviolable rights to life and health are trampled. They will learn that if they fail to perform or become ill and need to be cared for and threated, there will be no reason why it is worth living.

Steadfast Onlus cooperates with schools, educational bodies, universities with the Steadfast Education project for the realization of a training course aimed at the knowledge and awareness of the uniqueness of human life, the related rights and the help and protection of the most vulnerable.

The right battle to fight is the one that guarantees serious or terminally ill patients the closeness and compassion of their loved ones by combining appropriate care, therapy and assistance capable of giving the dignity and value they deserve.

We will continue to defend the weakest. We owe it to those who, like Vincent and the little Charlie, Isaiah and Alfie, fought for what was rightfully theirs!