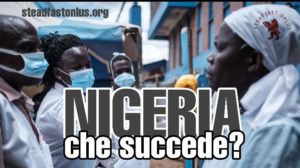 We at Steadfast Onlus express deep concern about the high number of unexplained deaths, 640 according to the task force, that are occurring in Nigeria, in the northern state of Kano.

As we have already explained to you on a number of occasions, in Nigeria as in the other countries of sub-Saharan Africa, the peripheral areas of large cities live in conditions of such hardship that they are not even subject to a census. Also, deaths in this area, which take place outside the hospital, are not recorded; so, there is no official data on an abnormal number of deaths, although several testimonies from funeral home workers report with concern that more bodies are buried than usual.

President Muhammadu Buhari extended the lockdown in Kano for another two weeks, announcing the sending of a government team to investigate, being concerned that this situation may be related to the Coronavirus. Currently Kano has 77 Covid-19 positive cases with three deaths. The government stated that initial reports from the Ministry of Health showed that most deaths were caused by complications resulting from hypertension, diabetes, meningitis and acute malaria. The Government is waiting for a final report from the Ministry to take the necessary action.

The tests for Covid-19 could give more definite answers, but they started just two weeks ago and a lab had to close due to contamination.

What else could have caused these sudden deaths?

Private healthcare facilities providing a significant part of the services in the region have been closed due to fear of the pandemic. This could mean a lack of support for those with poor health and who may have died as a result.

A doctor said that there is still great concern about Lassa fever infection in the communities. The State had five confirmed cases and one death, according to the latest report of the Nigerian Centre for Disease Control.

We sincerely hope that the Government will work things out with this matter as soon as possible and take the necessary measures to limit the damage. Our NigeriAid project must move forward to support a land battered by multiple factors, including this latest pandemic. We can’t and we mustn’t stop.