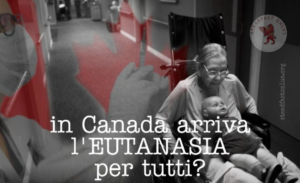 On 24 February 2020, the Federal Government of Canada submitted Bill C-7, an act to amend the Criminal Code on Medically Assisted Death (MAID). If this is passed without change, it will make Canadian euthanasia legislation the most permissive in the world.

The medically assisted death had been decriminalized in Canada with the Carter ruling in 2016. In September 2019, the Québec Supreme Court declared the Federal Law and the Québec Provincial Law on MAID unconstitutional in so far as they provide for the reasonably foreseeable natural death of the applicant as a condition of access, considering this criterion too restrictive and contrary to the fundamental rights guaranteed by the Canadian Charter of Rights and Freedoms.

Bill C-7, in response to the Supreme Court’s statement, amends the Criminal Code, repealing the provision requiring a person’s natural death to be reasonably foreseeable in order to benefit from the MAID.

The same bill also specifies that people whose only medical condition is a mental illness cannot benefit from MAID, making it clear that a mental illness is not considered a pathology or disability.

However, this point in the amendment is misleading. The Canadian Euthanasia Act, after the Court’s ruling, states that a person can have access to euthanasia if the pathology, disorder, disability or state of decline leads him/her to endure intolerable physical or psychological suffering that cannot be alleviated.

In fact, by removing the “terminal illness” requirement, the court decision extended euthanasia even for psychological reasons.

The bill would also repeal the ten-day cooling-off period for the applicant and propose to reduce the number of witnesses, which would avoid the risk of coercion, to one, where the obligation was two, making it legal for that witness to be the patient’s paid personal care provider or healthcare provider.

It seems as if the Canadian euthanasia machine doesn’t want to get in the way, no second thoughts and possibly no witnesses.

At Steadfast Onlus it’ s clear to us how inevitable drift is as soon as the inalienable right to life is suppressed by a law. By amending the legislation to regulate tragic and extreme cases and, within a few years, as in Canada, there will be an exponential increase in deaths from euthanasia because the mesh is being widened more and more and the eligibility criteria for this practice become increasingly lax.

We hope that this bill will be rejected in June 2020, when the federal government will carry out the first of its five-yearly reviews.

We also hope that there will be a change of course and that palliative care will be promoted and encouraged, with at least the same firmness with which euthanasia is offered.