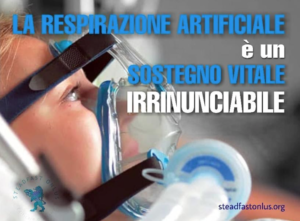 It seems that Covid-19 clarified in a very short time what pro-life mobilisation had been trying to show from time to time.

Artificial respiration, which has been included among medical treatments along with nutrition and hydration in the Italian law, can be interrupted or not even initiated if followed by the choices made when compiling the Advance Treatment Provisions (DAT).

In the health emergency we are experiencing now, on the other hand, we saw how many lives it was possible to save thanks to artificial ventilation for more or less long periods.

We all remember the general outrage when it became clear that there wouldn’t be enough ventilator for everyone.

The possibility that some of us could be considered by a doctor less worthy than another patient to have access to intensive care and artificial ventilator became clear in its tragedy.

Imagine if in that chaos doctors had also to consult a computer to find out if you wanted to be saved or not, how many more people would have died?

What does all this make us think?

The right to treatment, to care, is part of a civil society that must have the aim of never leaving anyone behind, least all the most fragile.

Life is not an option to choose according to a phantom right to self-determination, but a value to hold on with all one’s strength regardless of age.

Artificial respiration is therefore, now more than ever irrefutable, a precious vital support that cannot be refused.

We at Steadfast Onlus are happy that in this period of suffering there is at least one glimmer to enjoy.

The change of perspective that we have witnessed must be a new basis to restart a serious and motivated debate to protect the sick, to extend palliative care, not euthanasia to everyone and at the expense of the State.

We expect our leaders to take note of what our community has shown to want: life, not death.

We conclude with the thought of Assuntina Morresi that we want to share with you.

«End of life. The coronavirus has made it clear that breathing is not a “therapy.”

Never has it ever seemed so clear to all Italians, as in the two months of lockdown, that living and dying are not two equivalent options. With the eclipse of death as a “right”

The coronavirus is forcing us to rethink our entire way of life, reshaping our existence around inconceivable behaviours and lifestyles. An ancient and unknown pathogen has imposed on us a sudden and drastic anthropological change, which is grafted onto the much slower one we have experienced in recent decades, caused instead by our human work, that is, by biotechnological development, marked by the “new rights” and the great battles of bioethics. The New World ante Covid 19, so close in time, has aged abruptly: the coronavirus is the great eyeglass that brings sight into focus, restoring priorities, interests and urgencies.

The pandemic has first of all put the value of the life of every human being back at the centre, making it clear with unspeakable drama that living is clearly preferable to dying, and that the good doctor is the one who tries to save his patients, doing everything he can to snatch them from death, right to the end. The heroic doctor who risks his life to cure the sick, the doctor with the mask that lovingly cradles Italy: concepts and images that were impossible in the media and bioethical narrative before Covid, when the compass was the right to individual self-determination. It must be said that this is not a sudden return to value horizons of a bygone era. No one in these months of pandemic has questioned the so-called civil rights, from the binding living will to the autonomy of the patient, including the regulation of assisted suicide: suddenly these things have simply become marginal issues that are no longer talked about. In the Netherlands, health authorities have had to admit that administering euthanasia is not a priority, and that doctors must first of all treat the infected patients. It is now clear to everyone around the world that a ventilator will not cure coronavirus infection but is a mere life support (remember that Italian law 219 on biotesting considers artificial nutrition and hydration, and consequently also ventilation, as well as therapies, and not supports for survival), which is used to try to keep you alive while you fight your battle against the virus. Expressions such as “forced breathing” or concerns about “being attached to a machine” have disappeared from the media. And if it is true that these are temporary situations (in intensive therapy one stays for a few weeks at most), it is also true that there is no evidence that someone refused the ventilator, or had problems when being intubated, because they are worried about the future quality of life.

We’ve rather realised how inhuman it is to die alone: the awareness of the final suffering of a loved one, lived in solitude, is the wound that will take longer than any other to heal in those who have lost a family member or a close person. At the same time, new urgencies are emerging: we have realised that there are older people, and that they are fragile. A global fragility, starting from the difficulties of using computer tools and access to the network, the only means to live some form of sociality in pandemic time. We were outraged at the idea that someone might even think of excluding the elderly from intensive care: In Italy, the National Committee for Bioethics has defined it as ethically unacceptable to adopt age (and any other non-clinical parameter) as a criterion for access to treatment when it is scarce.

We were moved to see them die, our elders: so many, so alone, so helpless. But above all, we suddenly realised when each of us starts to be an old person: the change of condition has been established by the coronavirus, more aggressive with the over-sixties, so much so that it has come to the point of publicly discussing the possibility of confining at home for months precisely the over-sixties, more at risk than others. An age for which, until a few months ago, the possibility of starting a new life, new loves, perhaps with some pharmacological “help”, was rather talked about.

In short: there was a bioethical discussion about transhumanism and human empowerment, and suddenly we found ourselves old and vulnerable. We were suddenly faced with a mocking and merciless virus with our fragilities, with important implications for our existential priorities: we don’t have to avoid dealing with it. Treating it as a parenthesis in our lives would be the worst mistake of all».