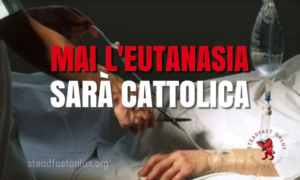 On the 4th of May, the decision of the catholic Congregation for the Doctrine of the Faith, with a letter from the Prefect Cardinal Luis Francisco Ladaria Ferrer, is that the twelve psychiatric institutes of the Brothers of Charity in Belgium cannot be considered Catholic anymore.

Most psychiatric facilities in Belgium are under the management of the Catholic Church, in particular the Brothers of Charity, a religious congregation founded in Belgium at the end of the 19th century, with a vocation for professional care, especially for psychiatric patients.

In Belgium their psychiatric facilities are managed by a company called “Provincialat des Frères de la Charitè asbl”, whose management is mainly composed of laic people.

The issue arose three years ago when the board of directors of the company included the possibility to practice euthanasia in the guidelines of the above mentioned facility.

The Superior General of the Congregation, Brother René Stockman, had immediately condemned the decision as “unacceptable”, calling for the immediate intervention of the Vatican which, after a four-month process, had declared that the hospitals of the Brothers of Charity should stop the possibility of access to euthanasia in the psychiatric hospitals run by the Congregation.

The decision of the CDF comes at the conclusion of three years of dispute between the Brothers of Charity and the company that manages their hospitals, which, on the other hand, has continued to reaffirm its willingness to allow euthanasia.

As Steadfast Onlus we join the sorrow of the congregation, which is forced, but determined, to let go of its psychiatric centres in Belgium, in order to remain faithful to the dictates of Catholic doctrine.

The sacred value of human life which recalls charity, care and accompaniment of the suffering person leads to the moral unacceptability of euthanasia.

This choice is a necessary but extremely worrying choice for psychiatric patients in these facilities who risk no longer finding a safe environment that cares about their treatment and look to respect a biased will. This is certainly manifested in particular moments of fragility or without the necessary mental awareness.